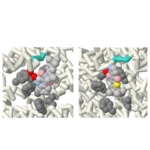 Comparing the Effectiveness of Ivacaftor and GLPG1837

Cystic Fibrosis is a fatal autosomal recessive genetic disease that effects more than 70,000 people worldwide. This disease is caused by a mutation within the CFTR causing an excess of mucus within the lungs, and effects other cells that produce bodily fluids (i.e. sweat and digestive fluids). The aim of this project was to identify the key differences between two similar potentiator drugs, Ivacaftor (Kalydeco®) and GLPG1837, that are used in the treatment of Cystic Fibrosis. The research question posed was: How does a model show the difference in efficacy of GLPG1837 compared to Ivacaftor? The comparison was done through the research and rendering of protein models through the Jmol software. The Jmol files of the drugs were taken from the Protein Data Bank (PDB). The files that correlate to the drugs are 6O2P (Ivacaftor) and 6O1V (GLPG1837). The files displayed the drugs within the CFTR channel attached to their binding sites. Additionally, further research was done on their respective chemical compositions through PubChem. The noticeable differences between the two drugs were their chemical composition, despite binding to the same active site within the CFTR. There is sulfur found within the hinge region (binding site) of the CFTR. Due to GLPG1837 containing a sulfur molecule and sulfur’s high binding affinity for itself, this appears to be the cause of GLPG1837’s increased efficacy over Ivacaftor. Due to the noticeable difference of the drugs displayed in the models it is concluded that an efficacy can be shown between the medications through modeling. Furthermore, it’s recommended that models such as these be used in the process of providers explaining treatments to patients who are using these medications. By providing tools to break down the science behind these medications to all age groups it can further rapport between patient and provider. As well as reduce stress of patients due to a better understanding of their treatment.