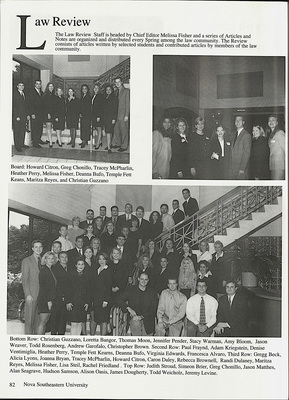 These are posed photographs of the Nova Law Review Board of Editors and staff from the 1999-2000 academic year. These photographs appeared in the First Amendment yearbook .

The first caption reads, "The Law Review Staff is headed by Chief Editor Melissa Fisher and a series of Articles and Notes are organized and distributed every Spring among the law community. The Review consists of articles written by selected students and contributed articles by members of the law community."

This is an electronic .jpeg file that was created from the original photos that appeared in the 2000 edition of the Nova Southeastern University Shepard Broad College of Law School First Amendment yearbook.

These photographs portray the staff and editorial board members of the Nova Law Review during the 1999-2000 academic year.

These photographs were scanned from the 2000 edition of the First Amendment yearbook created at the Nova Southeastern University Shepard Broad College of Law.