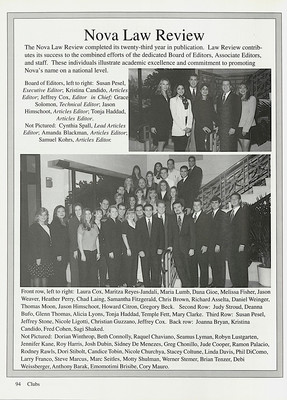 These are posed photographs of the Nova Law Review's Board of Editors and staff members from the 1998-1999 academic year. These photographs appeared in the First Amendment yearbook .

The first caption reads, "The Nova Law Review completed its twenty-third year in publication. Law Review contributes its success to the combined efforts of the dedicated Board of Editors, Associate Editors, and staff. These individuals illustrate academic excellence and commitment to promoting Nova's name on a national level."

This is an electronic .jpeg file that was created from the original photo that appeared in the 1999 Nova Southeastern University Shepard Broad College of Law School First Amendment yearbook.

These photographs portray staff and board members of the Nova Law Review during the 1998-1999 academic year.

These photogaphs were scanned from the 1999 edition of the First Amendment yearbook created at the Nova Southeastern University Shepard Broad College of Law.