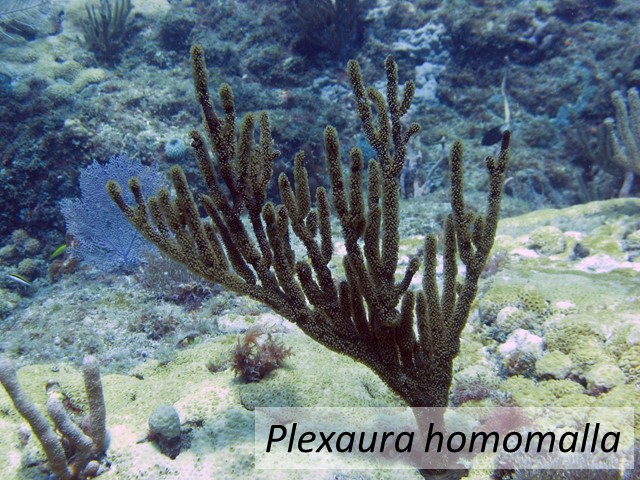 Colony Form: Bushy but in one plane.

Branches: Lateral and dichotomous; thin and brittle; to 10 cm long and 2-5-5.0 mm across; crumbly when dried.

Distribution: Common in South Florida, the Bahamas and the Caribbean Sea.

Notes: Secondary metabolite production includes fatty acid chain derivatives of a variety of prostaglandins, which are largely biologically inactive, and their purpose in this octocoral remains unknown. Secondary metabolites in other Euniceas may have strong anti-inflammatory, anticarcinogenic and anti-tumor activity. This species produces prostaglandin A2 (PGA) throughout most of the Caribbean at levels 1 million times higher than those of most other organisms. Molecule exhibits the same configuration at carbon 15 as mammalian prostaglandins, except in Florida where P.homomalla synthesizes large amounts of 15(R)-PGA2. Labrids have been observed grazing on the branches of this species. Oral doses of prostaglandins produce vomiting in most species, and this may act as an anti-predator chemical defense against reef fishes.