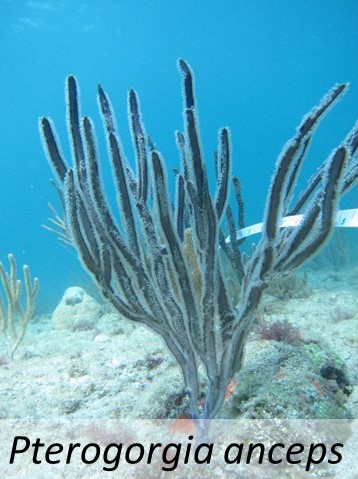 Branches: Flat, with 3-4 flaps or flanges producing a “Y” or “X” cross section. Branch width 3-6 cm; tapered from the base and often twisted; tips long and thin, pointed or flattened.

Apertures: Polyps emerge from a common groove along branch edges.

Notes: The largest species in Pterogorgia. Although the 3-4 blades on any given branch generally distinguish P. anceps from P. guadalupensis, which has flat blades up to 10 mm across near the base and tends to branch in a single plane, recent molecular evidence suggests that a continuum exists between these two species. All Pterogorgia spp. shed the outer layer of their rind if it becomes overgrown by algae (Collin et al. 2005).