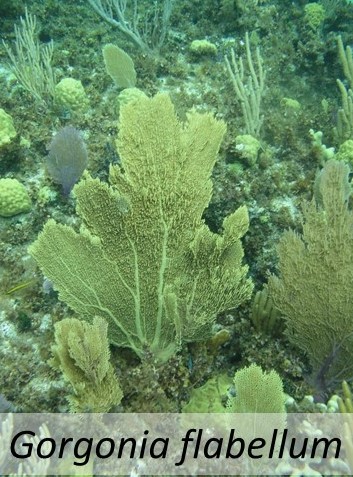 Colony Form: Monoplanar fan to at least 1 m across.

Axis: Flattened at right angles to plane of fan on small ascending and interconnecting branchlets (pinnules).

Apertures: Round or oval, chiefly on sides of small branchlets.

Habitat: Crests and seaward slopes of shallow reefs exposed to surge, as shallow as 1 m and rare below 10 m.

Notes: Fans grow perpendicular to current and oscillating flow to maximize their surface area for feeding. G. flabellum with numerous small branchlets arising from one or both sides of fan have been called form occatoria, but this has no phylogenetic significance. G. ventalina is preyed upon by several gastropods, including the ovulids Cyphoma gibbosum, Cybovula acicularis, Simnialena uniplicata, and the nudibranch Tritonia hamnerorum. G. flabellum is also infected by the fungus Aspergillus sydowii, which causes necrosis and may kill the entire fan.