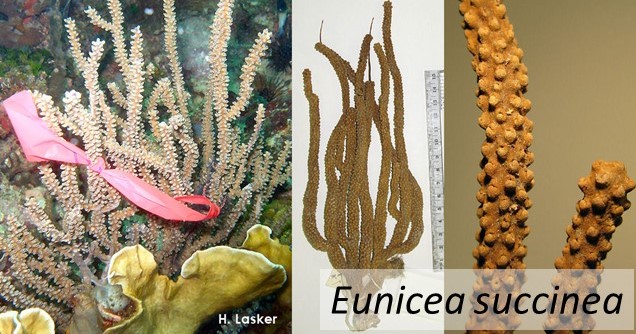 Colony Form: Candelabrum or bushy mainly in one plane with branches arising near colony base; usually <60 cm but up to 1 m tall. Morphotype plantaginea with fewer, more slender branches.

Habitat: Reef terraces and slopes with moderate wave exposure, from shallow water to 25 m in depth.

Distribution: Bahamas, South Florida, and throughout the Caribbean Sea.

Notes: The plantaginea morphotype is taller and bushier with longer branches. E. succinea grows in one plane but may vary in branch density from few and separated to many and crowded. It can also be confused with thinner colonies of E. mammosa; check the calices.