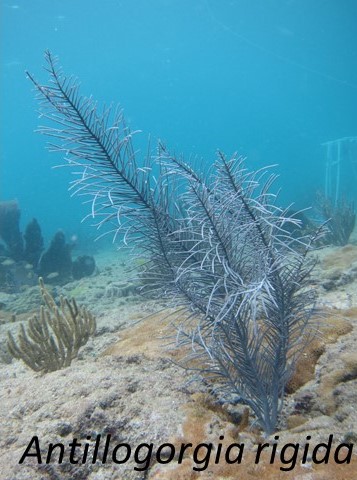 Branches: Pinnules round, long, tapered near tips, irregularly spaced, stiffer than others in the genus but still flexible.

Apertures: Slit-like to oval, 1 mm across, in single irregular row or multiple series not strongly restricted to sides of pinnules. Also irregularly distributed or in winding row(s) along main branches.

Notes: Williams and Chen (2012) transferred all Western Atlantic species of Pseudopterogorgia to the genus Antillogorgia. Sanchez & Wirshing (2005) treat A. blanquillensis (Stiasny, 1941) as a junior synonym of A. rigida. May be preyed upon by the flamingo tongue gastropod Cyphoma gibbosum.