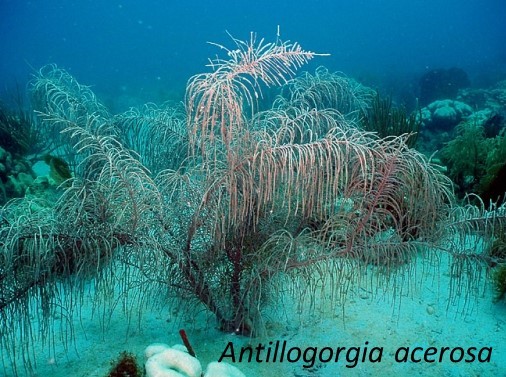 Apertures: Round to slit-like, usually smooth, restricted to row along opposite narrow sides of pinnules.

Habitat: On reefs and hard bottoms in 1-30 m depth.

Notes: Finely sandpapery to the touch. This species is the tallest gorgonian in the western tropical Atlantic. Off Cartagena, Colombia, it is commonly harvested as raw material for handicrafts. Year-long growth studies at two different reefs revealed that most growth was due to rapid elongation of the main (‘mother’) branch and production of daughter branches from the same mother branch or a few of them. Some small colonies doubled in size in a year. Absolute branch growth rate correlated weakly with size, with no significant relationships between branch size and percent growth. Although the pinnate branching pattern in A. acerosa is similar to that in A. elisabethae and A. bipinnata, it produces taller colonies because the main stem grows more rapidly, augmenting exposure to light and higher fluxes of suspended food in the benthic boundary layer. Colonies clipped for harvest exhibited clear signs of regeneration, even in cases where only the holdfast remained. A. acerosa appears to resemble other Antillogorgia species in that regenerating colonies may grow faster than intact ones. Williams and Chen (2012) transferred all Western Atlantic species of Pseudopterogorgia to the genus Antillogorgia. The flamingo tongue gastropod, Cyphoma gibbosum, preferentially consumes axial tissues near the base of colonies.