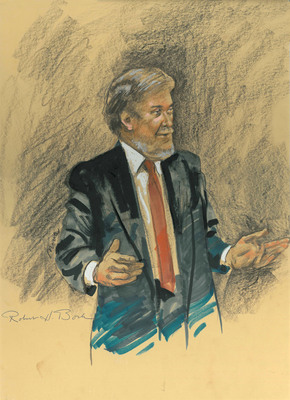 Robert H. Bork (March 1, 1927 – December 19, 2012) was an American legal scholar who advocated the judicial philosophy of originalism. Bork served as a Yale Law School professor, Solicitor General, Acting Attorney General, and a judge of the United States Court of Appeals for the District of Columbia Circuit. In 1987, he was nominated to the Supreme Court by President Ronald Reagan, but the Senate rejected his nomination. Following his failure to be confirmed, Bork resigned his seat on the U.S. Court of Appeals for the D.C. Circuit and was for several years both a professor at George Mason University School of Law and a senior fellow at the American Enterprise Institute for Public Policy Research, a conservative think tank. Bork also consulted for Netscape in the Microsoft litigation. Bork was a fellow at the Hudson Institute. He later served as a visiting professor at the University Of Richmond School Of Law and was a professor at Ave Maria School of Law in Naples, FL. In 2011, Bork worked as a legal adviser for the presidential campaign of Republican Mitt Romney. Bork had more success as an antitrust scholar, where his once-idiosyncratic view that antitrust law should focus on maximizing consumer welfare has come to dominate American legal thinking on the subject.