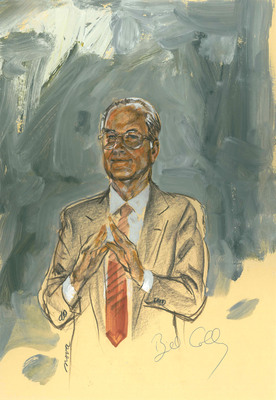 William E. Colby (January 4, 1920 – April 27, 1996) spent a career in intelligence for the United States, culminating in holding the post of the Director of Central Intelligence (DCI) from September 1973 to January 1976. During World War II Colby served with the Office of Strategic Services. After the war he joined the newly created Central Intelligence Agency (CIA). Before and during the Vietnam War, Colby served as chief of station in Saigon, chief of the CIA's Far East Division, and head of the Civil Operations and Rural Development effort, as well as overseeing the Phoenix Program. After Vietnam, Colby became director of central intelligence and during his tenure, under intense pressure from the U.S. Congress and the media, adopted a policy of relative openness about U.S. intelligence activities to the Senate Church Committee and House Pike Committee. Colby served as DCI under President Richard Nixon and President Gerald Ford and was replaced by future president George H.W. Bush on January 30, 1976.