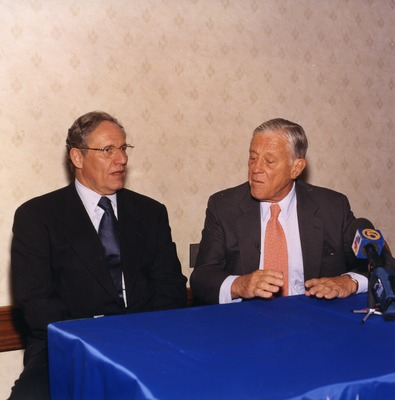 Robert Upshur Woodward (born March 26, 1943) is an American investigative journalist. He started working for The Washington Post as a reporter in 1971 and currently holds the title of associate editor.

While a young reporter for The Washington Post in 1972, Woodward teamed up with Carl Bernstein; the two did much of the original news reporting on the Watergate scandal. These scandals led to numerous government investigations and the eventual resignation of President Richard Nixon. The work of Woodward and Bernstein was called "maybe the single greatest reporting effort of all time" by longtime journalism figure Gene Roberts.

Woodward continued to work for The Washington Post after his reporting on Watergate. He has written 21 books on American politics and current affairs, 13 of which have topped best-seller lists.

Benjamin Crowninshield Bradlee (August 26, 1921 – October 21, 2014) was one of the most prominent journalists of post-World War II United States, serving first as managing editor, then as executive editor at The Washington Post, from 1965 to 1991. He became a public figure when he joined The New York Times in publishing the Pentagon Papers and gave the go-ahead for the paper's extensive coverage of the Watergate scandal. He was also criticized for editorial lapses when the Post had to return a Pulitzer Prize in 1981 after it discovered its award-winning story was false.

After retirement, Bradlee continued to be associated with the Post, holding the position of "Vice President at-large" until his death. In retirement Bradlee was an advocate for education and the study of history, including working for years as an active trustee on the boards of several major educational, historical, and archaeological research institutions.