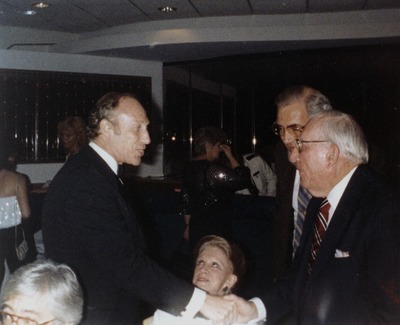 After retiring from the Presidency, Fischler served on the board of Broward County Public Schools from 1994 to 1998. He has also previously served as a consultant to the Ford Foundation, to various state departments of education, and to school districts in other states. He has authored numerous textbooks, articles, and other publications concerning teaching methods and science education. Today, Fischler is President Emeritus and University Professor at Nova Southeastern University and serves on the boards of a variety of community, arts, and education organizations. He continues to be active in the area of K-12 education reform, and publishes a blog on the topic titled "The Student is the Class".

Claude Denson Pepper (September 8, 1900 – May 30, 1989) was an American politician of the Democratic Party and a spokesman for left-liberalism and the elderly. He represented Florida in the United States Senate from 1936 to 1951 and the Miami area in the United States House of Representatives from 1963 until 1989.

Born in Chambers County, Alabama, Pepper established a legal practice in Perry, Florida, after graduating from Harvard Law School. After serving a single term in the Florida House of Representatives, Pepper won a 1936 special election to succeed Senator Duncan U. Fletcher. Pepper became one of the most prominent liberals in Congress, supporting legislation such as the Fair Labor Standards Act of 1938. After World War II, Pepper's conciliatory views towards the Soviet Union and opposition to President Harry Truman's 1948 re-nomination engendered opposition within the party. Pepper lost the 1950 Senate Democratic primary to Congressman George Smathers and returned to private legal practice the following year.

In 1962, Pepper won election to a newly-created district in the United States House of Representatives. He emerged as a staunch anti-Communist and strongly criticized Cuban leader Fidel Castro. Pepper served as chairman of the House Committee on Aging and pursued reforms to Social Security and Medicare. From 1983 to 1989, he served as chairman of the powerful House Rules Committee. He died in office in 1989 and was honored with a state funeral. In 2000, the United States Postal Service issued a 33¢ Distinguished Americans series postage stamp honoring Pepper.