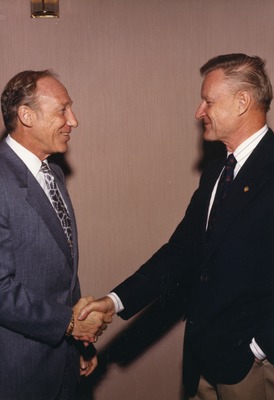 Zbigniew Kazimierz Brzezinski (March 28, 1928 – May 26, 2017) was a Polish-American diplomat and political scientist. He served as a counselor to President Lyndon B. Johnson from 1966 to 1968 and was President Jimmy Carter's National Security Advisor from 1977 to 1981. As a scholar, Brzezinski belonged to the realist school of international relations, standing in the geopolitical tradition of Halford Mackinder and Nicholas J. Spykman Brzezinski was the primary organizer of The Trilateral Commission.

Major foreign policy events during his time in office included the normalization of relations with the People's Republic of China (and the severing of ties with the Republic of China on Taiwan); the signing of the second Strategic Arms Limitation Treaty (SALT II); the brokering of the Camp David Accords; the overthrow of the US-friendly Mohammad Reza Pahlavi and the start of the Iranian Revolution; the United States' encouragement of dissidents in Eastern Europe and championing of human rights in order to undermine the influence of the Soviet Union; the arming of the Afghan mujahideen in response to the Soviet invasion of Afghanistan; and the signing of the Torrijos–Carter Treaties relinquishing U.S. control of the Panama Canal after 1999.

Brzezinski served as the Robert E. Osgood Professor of American Foreign Policy at Johns Hopkins University's School of Advanced International Studies, a scholar at the Center for Strategic and International Studies, and a member of various boards and councils. He appeared frequently as an expert on the PBS program The NewsHour with Jim Lehrer, ABC News' This Week with Christiane Amanpour, and on MSNBC's Morning Joe, where his daughter, Mika Brzezinski, is co-anchor. He was a supporter of the Prague Process.[6] His eldest son, Ian, is a foreign policy expert, and his youngest son, Mark, was the United States Ambassador to Sweden from 2011 to 2015.