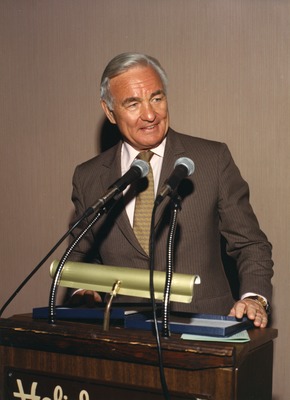 Stansfield Turner (December 1, 1923 – January 18, 2018) was an admiral in the United States Navy who served as President of the Naval War College (1972–1974), commander of the United States Second Fleet (1974–1975), Supreme Allied Commander NATO Southern Europe (1975–1977), and was Director of Central Intelligence (1977–1981) under the Carter administration. A graduate of the University of Oxford and the United States Naval Academy, Turner served for more than 30 years in the Navy, commanding warships, a carrier group, and NATO's military forces in southern Europe, among other commands.

Turner was appointed to lead the CIA by Jimmy Carter in 1977 and undertook a series of controversial reforms, including downsizing the Agency's clandestine arm and emphasizing technical intelligence collection over human intelligence. He also oversaw the CIA's responses to the Iranian Revolution and the Soviet–Afghan War. After leaving the CIA in 1981, Turner entered the private sector, authored several books, and criticized subsequent administrations, including the Bush administration's handling of the Iraq War. He was a senior research scholar at the University of Maryland, College Park's School of Public Policy.