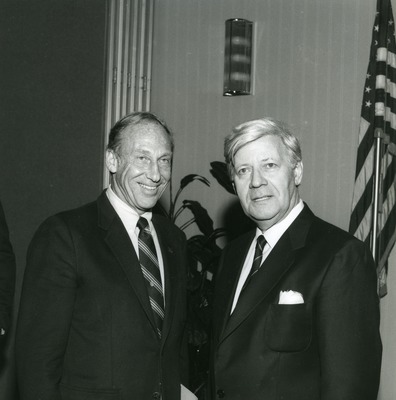 Helmut Heinrich Waldemar Schmidt 23 December 1918 – 10 November 2015) was a German politician and member of the Social Democratic Party of Germany (SPD), who served as Chancellor of the Federal Republic of Germany (West Germany) from 1974 to 1982.

Before becoming Chancellor, he had served as Minister of Defence (1969–1972) and as Minister of Finance (1972–1974). In the latter role, he gained credit for his financial policies. He had also served briefly as Minister of Economics and as acting Foreign Minister. As Chancellor, he focused on international affairs, seeking "political unification of Europe in partnership with the United States" and issuing proposals that led to the NATO Double-Track Decision in 1979 to deploy US Pershing II missiles to Europe. He was an energetic diplomat who sought European cooperation and international economic coordination and was the leading force in creating the European Monetary System in 1978. He was re-elected chancellor in 1976 and 1980, but his coalition fell apart in 1982 with the switch by his coalition allies, the Free Democratic Party.

He retired from Parliament in 1986, after clashing with the SPD's left-wing, who opposed him on defense and economic issues. In 1986 he was a leading proponent of the European monetary union and a European Central Bank.