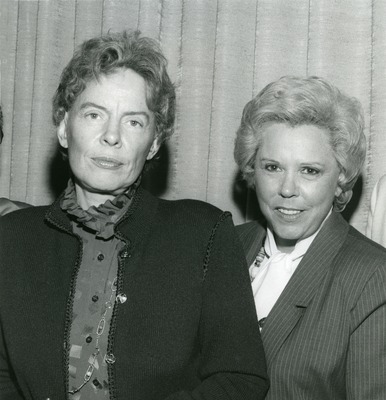 Jeane Duane Kirkpatrick (née Jordan; November 19, 1926 – December 7, 2006) was an American diplomat and political scientist who played a major role in the foreign policy of the Ronald Reagan administration. An ardent anti-communist, she was a longtime Democrat who became a neoconservative and switched to the Republican Party in 1985. After serving as Ronald Reagan's foreign policy adviser in his 1980 campaign, she became the first woman to serve as United States Ambassador to the United Nations.

She was known for the "Kirkpatrick Doctrine", which advocated supporting authoritarian regimes around the world if they went along with Washington's aims. She believed that they could be led into democracy by example. She wrote, "traditional authoritarian governments are less repressive than revolutionary autocracies." She sympathized with the Argentine government during the Falklands War when President Reagan came out in support of Margaret Thatcher.

Kirkpatrick served on Reagan's Cabinet on the National Security Council, Foreign Intelligence Advisory Board, Defense Policy Review Board, and chaired the Secretary of Defense Commission on Fail Safe and Risk reduction of the Nuclear Command and Control System. She wrote a syndicated newspaper column after leaving government service in 1985, specializing in analysis of the activities of the United Nations.

Ann Bishop (born: Harriette Himes) began her career writing for the CBS affiliate in upstate New York. She went on to work as a reporter for stations in Rochester and Baltimore. She accepted a position with WPLG Channel 10 in 1970. She was the first female broadcaster in a major market (Miami) to co-anchor the early and late evening news.

From 1976 until 1982, Bishop anchored the news alongside Glenn Rinker, Chuck Dowdle, and Walter Cronise. In 1982, Glenn Rinker left WPLG, and was replaced by Mike Schneider. Schneider and Bishop anchored the news together until 1986. In 1985, WPLG-TV beat the long-running ratings winner WTVJ and held on to the lead for ten years. Bishop continued to anchor the news alongside Dwight Lauderdale until 1995. Following her retirement, she continued to work as a consultant for the Post-Newsweek television stations, including WPLG, until her death on November 14, 1997, from colon cancer.

During her career, she covered three Democratic National Conventions, Pope John Paul II’s visit to Nassau, the Eastern Airlines strike, the forty-year anniversary of D-Day and the wedding of Prince Charles and Princess Diana. She also appeared on The Oprah Winfrey Show. Additionally, she received several honors, including the David Brinkley Award for Excellence, in 1990, awarded by Barry University.