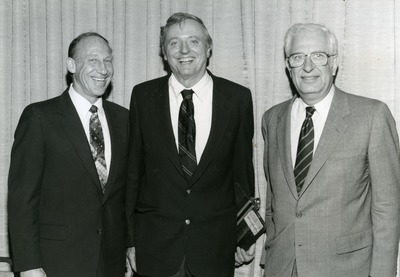 After retiring from the Presidency, Fischler served on the board of Broward County Public Schools from 1994 to 1998. He has also previously served as a consultant to the Ford Foundation, to various state departments of education, and to school districts in other states. He has authored numerous textbooks, articles, and other publications concerning teaching methods and science education. Today, Fischler is President Emeritus and University Professor at Nova Southeastern University and serves on the boards of a variety of community, arts, and education organizations. He continued to be active in the area of K-12 education reform, and publishes a blog on the topic titled "The Student is the Class".

Born in New York City, Buckley served stateside in the United States Army during the Second World War before attending Yale University, where he engaged in debate and conservative political commentary. Afterward, he worked for two years in the Central Intelligence Agency. In addition to editorials in National Review, Buckley wrote God and Man at Yale (1951) and more than fifty other books on diverse topics, including writing, speaking, history, politics, and sailing. His works include a series of novels featuring fictitious CIA agent Blackford Oakes as well as a nationally syndicated newspaper column.

Buckley called himself both a conservative and a libertarian. George H. Nash, a historian of the modern American conservative movement, said in 2008 that Buckley was "arguably the most important public intellectual in the United States in the past half century. For an entire generation, he was the preeminent voice of American conservatism and its first great ecumenical figure." Buckley's primary[citation needed] contribution to politics was a fusion of traditionalist conservatism and classical liberalism, which laid the groundwork for the rightward shift in the Republican Party exemplified by Barry Goldwater and Ronald Reagan.

William Horvitz was born in Elyria, a small town outside Cleveland, in 1926. After graduating from the Wharton School of the University of Pennsylvania in Philadelphia in 1953, he moved to Broward County to help his father run his family's fledgling business. At the time, Broward County had a fraction of its current population and was considered a visitors' community. Taking a risk, he bought huge parcels of land hoping the area would develop. Horvitz began building and selling single-family homes; after World War II, he introduced the first planned residential community, then Hollywood Mall, considered at the time of its opening in the 1970s as a prototypal mall. The risk paid off, allowing him to spread his influence in the years to come by helping several Broward charities to raise millions of dollars. Among them are Women In Distress, the Hollywood YMCA, Boys and Girls Club, and the Jewish Foundation of Broward County.

Mr. Horvitz turned the once-struggling Hollywood Inc. into the largest development company in Hollywood. He sold it in 1988 for $300 million to developer Michael Swerdlow. After that sale, he founded DWLD Enterprises, Inc., an investment and brokerage company he ran closely with his son, David.