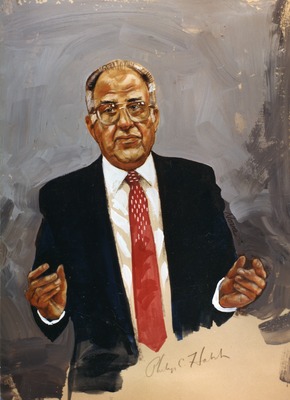 Philip Charles Habib (February 25, 1920 – May 25, 1992) was the most famous career diplomat in the world in the 1980s. He was best known for his work as Ronald Reagan's special envoy to the Middle East 1981-83. In that role he averted an Israel-Syria war and an Israel-PLO war in 1981, then negotiated a peaceful end to Israel's 1982 siege of Beirut. In 1986 he was instrumental in ending Ferdinand Marcos's attempt to steal the 1986 presidential election in the Philippines. U.S. special envoy to Central America in 1986-87, he helped Costa Rican president Oscar Arias shape and sell the peace plan that led to the end of the region's civil wars. He had come out of retirement to take each of those assignments. During his 30-year career as a Foreign Service officer, he had mostly specialized in Asia. In 1968, he was instrumental in halting the escalation of U.S. involvement in Vietnam.