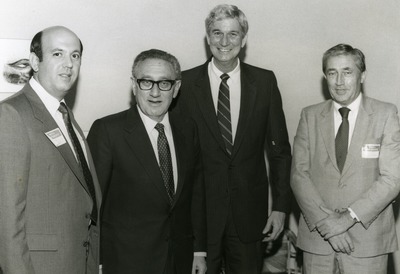 Second from Left in the photograph.

Henry Alfred Kissinger born Heinz Alfred Kissinger; May 27, 1923) is an American politician, diplomat, and geopolitical consultant who served as United States Secretary of State and National Security Advisor under the presidential administrations of Richard Nixon and Gerald Ford. A Jewish refugee who fled Nazi Germany with his family in 1938, he became National Security Advisor in 1969 and U.S. Secretary of State in 1973. For his actions negotiating a ceasefire in Vietnam, Kissinger received the 1973 Nobel Peace Prize under controversial circumstances, with two members of the committee resigning in protest.

A practitioner of Realpolitik, Kissinger played a prominent role in United States foreign policy between 1969 and 1977. During this period, he pioneered the policy of détente with the Soviet Union, orchestrated the opening of relations with China, engaged in what became known as shuttle diplomacy in the Middle East to end the Yom Kippur War, and negotiated the Paris Peace Accords, ending American involvement in the Vietnam War. Kissinger has also been associated with such controversial policies as U.S. involvement in the 1973 Chilean military coup, a "green light" to Argentina's military junta for their Dirty War, and U.S. support for Pakistan during the Bangladesh War despite the genocide being perpetrated by his allies. After leaving the government, he formed Kissinger Associates, an international geopolitical consulting firm. Kissinger has written over a dozen books on diplomatic history and international relations.

Kissinger remains a controversial and polarizing figure in U.S. politics, both condemned as an alleged war criminal by many journalists, political activists, and human rights lawyers, and venerated as a highly effective U.S. Secretary of State by many prominent international relations scholars. With the death of centenarian George Shultz in February 2021, Kissinger is the oldest living former U.S. Cabinet member and the last surviving member of Nixon's Cabinet.