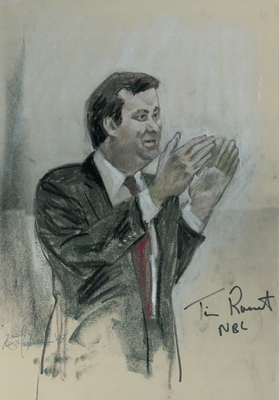 Timothy John Russert (May 7, 1950 – June 13, 2008) was an American television journalist and lawyer who appeared for more than 16 years as the longest-serving moderator of NBC's Meet the Press. He was a senior vice president at NBC News, Washington bureau chief, and also hosted an eponymous CNBC/MSNBC weekend interview program. He was a frequent correspondent and guest on NBC's The Today Show and Hardball. Russert covered several presidential elections, and he presented the NBC News/Wall Street Journal survey on the NBC Nightly News during the 2008 U.S. presidential election. Time magazine included Russert in its list of the 100 most influential people in the world in 2008.[1] Russert was posthumously revealed as a 30-year source for syndicated columnist Robert Novak.