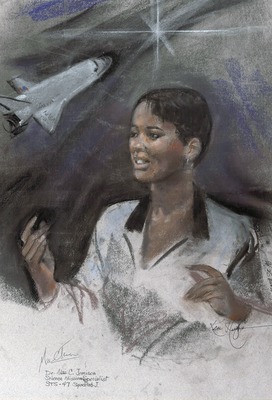 Mae Carol Jemison (born October 17, 1956) is an American engineer, physician, and former NASA astronaut. She became the first black woman to travel into space when she served as a mission specialist aboard the Space Shuttle Endeavour. Jemison joined NASA's astronaut corps in 1987 and was selected to serve for the STS-47 mission, during which she orbited the Earth for nearly eight days on September 12–20, 1992.

Born in Alabama and raised in Chicago, Jemison graduated from Stanford University with degrees in chemical engineering as well as African and African-American studies. She then earned her medical degree from Cornell University. Jemison was a doctor for the Peace Corps in Liberia and Sierra Leone from 1983 until 1985 and worked as a general practitioner. In pursuit of becoming an astronaut, she applied to NASA.

Jemison left NASA in 1993 and founded a technology research company. She later formed a non-profit educational foundation and through the foundation is the principal of the 100 Year Starship project funded by DARPA. Jemison also wrote several books for children and appeared on television several times, including in a 1993 episode of Star Trek: The Next Generation. She holds several honorary doctorates and has been inducted into the National Women's Hall of Fame and the International Space Hall of Fame.