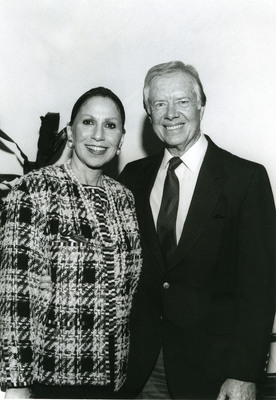 Barbara Schlesinger, known to all as Bobbe, was originally from Chelsea, MA, and was the daughter of Al and Tessie Butler. She came to South Florida to attend the University of Miami where she graduated in 1954. Throughout her life, she was active in charitable work, notably hosting the Race for Life charity events for many years. She wrote a social column in local newspapers.

James Earl Carter Jr. (born October 1, 1924) is an American philanthropist, former politician, and businessman who served as the 39th president of the United States from 1977 to 1981. A member of the Democratic Party, he previously served as a Georgia State senator from 1963 to 1967 and as the 76th governor of Georgia from 1971 to 1975. Since leaving the presidency, Carter has remained engaged in political and social projects as a private citizen. In 2002, he was awarded the Nobel Peace Prize for his work in co-founding The Carter Center.