President Truman and the birthday cake 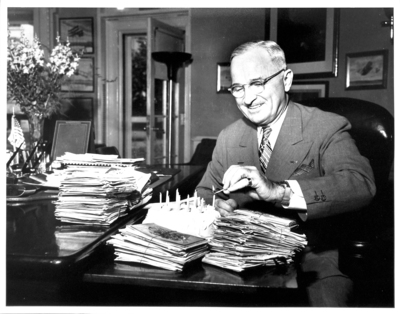 Harry S. Truman (May 8, 1884 – December 26, 1972) was the 33rd president of the United States, serving from 1945 to 1953, succeeding upon the death of Franklin D. Roosevelt after serving as the 34th vice president. He implemented the Marshall Plan to rebuild the economy of Western Europe and established the Truman Doctrine and NATO to contain communist expansion.

Truman grew up in Independence, Missouri, and during World War, I fought in France as a captain in the Field Artillery. Returning home, he opened a haberdashery in Kansas City, Missouri, and was later elected as a Jackson County official in 1922. Truman was elected to the United States Senate from Missouri in 1934 and gained national prominence as chairman of the Truman Committee aimed at reducing waste and inefficiency in wartime contracts. Soon after succeeding in the presidency, he authorized the first and only use of nuclear weapons in war. Truman's administration engaged in an internationalist foreign policy and renounced isolationism. He rallied his New Deal coalition during the 1948 presidential election and won a surprise victory that secured his own presidential term. Wikipedia