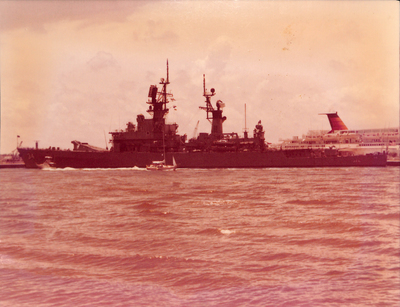 USS Biddle (DLG-34/CG-34) was a Belknap-class guided-missile frigate/cruiser of the United States Navy. She saw action in Vietnam, where she is believed to be the last ship to down an enemy aircraft with hand-loaded guns. She was involved in the Gulf of Sidra incident in 1981. The cruiser was decommissioned on 30 November 1993 and sold for scrap on 4 December 2000. (Wikipedia)