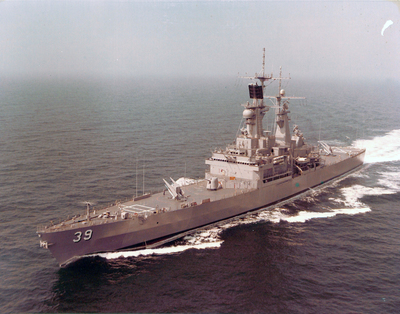 HMAS Hobart (D 39) was a Perth-class guided missile destroyer of the Royal Australian Navy (RAN). Built-in the United States of America to a slight variant of the United States Navy (USN) Charles F. Adams class, she was commissioned into the RAN in 1965. In March 1967, Hobart became the first RAN combat ship deployed to fight in the Vietnam War. This marked the start of consistent six-month deployments to the warzone, which continued until late 1971; Hobart was redeployed in 1969 and 1970. During the 1968 tour, the destroyer was attacked by a United States Air Force aircraft.

After the Vietnam War, Hobart saw service during Operation Navy Help Darwin; the RAN disaster relief effort following Cyclone Tracy was the first RAN ship to dock at HMAS Stirling in Western Australia and completed a round-the-world voyage in 1976. The ship was modernized during the late 1970s. Hobart was decommissioned in 2000, and sunk as a dive wreck off South Australia. (Wikipedia)