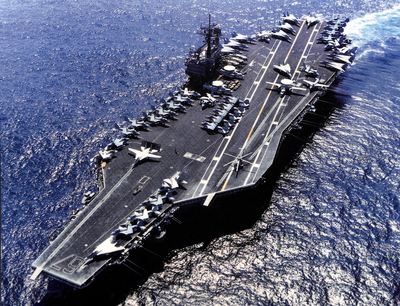 USS John F. Kennedy (CV-67) (formerly CVA-67) is the only ship of her class (a variant of the Kitty Hawk class of aircraft carrier) and the last conventionally powered carrier built for the United States Navy.[5] The ship was named after the 35th President of the United States, John F. Kennedy, and was nicknamed "Big John". John F. Kennedy was originally designated a CVA (fixed-wing attack carrier); however, the designation was changed to CV.

After nearly 40 years of service in the United States Navy, John F. Kennedy was officially decommissioned on 1 August 2007. She is berthed at the NAVSEA Inactive Ships On-site Maintenance facility in Philadelphia and, until late 2017, was available for donation as a museum and memorial to a qualified organization. In late 2017, the Navy revoked her "donation hold" status and designated her for dismantling. The name has been adopted by the future Gerald R. Ford-class aircraft carrier John F. Kennedy (CVN-79). (Wikipedia)