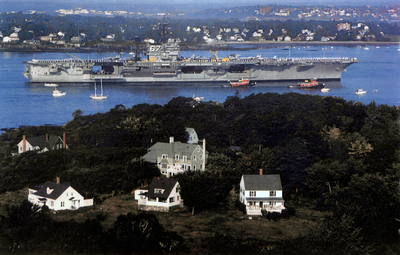 The seventh USS Ranger (CV/CVA-61) was the third of four Forrestal-class supercarriers built for the United States Navy in the 1950s. Although all four ships of the class were completed with angled decks, Ranger had the distinction of being the first US carrier built from the beginning as an angled-deck ship.

Commissioned in 1957, she served extensively in the Pacific, especially the Vietnam War, for which she earned 13 battle stars. Near the end of her career, she also served in the Indian Ocean and the Persian Gulf.

Ranger was decommissioned in 1993 and was stored at Bremerton, Washington until March 2015. She was then moved to Brownsville for scrapping, which was completed in November 2017. Wikipedia