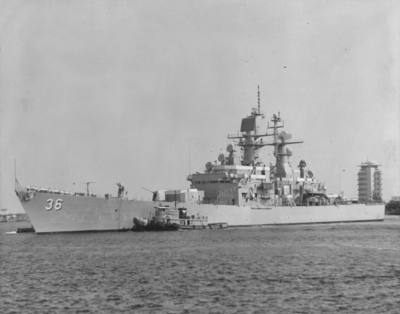 USS California (CGN-36), the lead ship of the California-class of nuclear-powered guided missile cruisers, was the sixth warship of the United States Navy to be named for the State of California. USS California and her sister ship, USS South Carolina were equipped with two single-armed Mk 13 launchers, fore, and aft, for the Standard Missile, one ASROC missile launcher, and two Mk-141 launchers for the Harpoon missiles. These cruisers were equipped with two 5-inch/54 caliber Mk 45 guns rapid-fire cannons, fore and aft. The two cruisers also had a unique arrangement aft of their superstructures with a flight deck and lowerable safety fences. Both cruisers also had full suites of anti-submarine warfare equipment. Thus, these warships were designed to combat all threats, in the air, on the surface, and underwater.