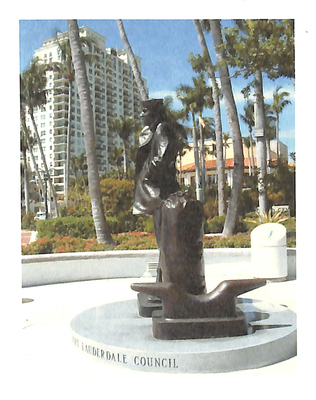 Merle was the young man who started the first flying service in Fort Lauderdale way back in the 1920s.

Merle had been in the army during the war and afterwards he learned to fly. He was one of the daredevils known as ‘barnstormers’ who traveled around the country entertaining people by performing aerobatic feats. Merle had one or two narrow escapes.

He helped realtors during the land boom of the 1920s by taking them up in his plane to take aerial shots of the land and properties that had for sale. When the hurricane hit in September 1926, Merle was in his hometown in Maine but flew back to Fort Lauderdale as soon as he could and offered his services.

In 1928, he was approached by two young men who wanted to hire his plane to fly to West Palm Beach. At the last minute, Merle decided to accompany them. With one of the young men at the controls, something went badly wrong as they approached the West Palm landing strip and the plane crashed into an orange grove. The pilot survived but the two passengers did not. Merle was twenty-nine years old.

This spurred on the city to establish its own, permanent landing strip, and exactly one year after the accident the Merle Fogg Flying Field was opened. Years afterward, when the United States joined the Second World War, the flying field was taken over by the government and operated as Naval Air Station, Fort Lauderdale.

After the war, it was acquired by Broward County and today it is the Fort Lauderdale – Hollywood International Airport.