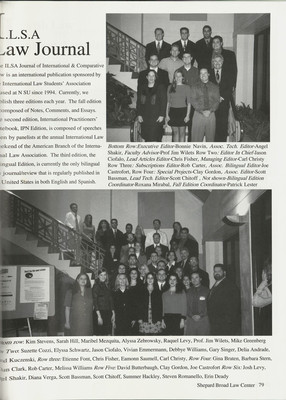 These posed photographs feature the editorial board, staff, and faculty members who were part of the ILSA Journal of International and Comparative Law during the 1999-2000 academic year. These photos appeared in the First Amendment yearbook.

This is an electronic .jpeg file that was created from the original photo that appeared in the 2000 edition of the Nova Southeastern University Shepard Broad College of Law School First Amendment yearbook.

These photographs include faculty, staff, and editorial board members who were involved in creating the ILSA Journal of International and Comparative Law during the 1999-2000 academic year.

This photo was scanned from the 2000 edition of the First Amendment yearbook created at the Nova Southeastern University Shepard Broad College of Law.

All authors and creators retain copyright to the works posted to this institutional repository and inclusion in this open-access online repository does not reduce, limit or waive the copyright status of any image, file, or document within the repository. For previously published works (journal articles, book chapters, etc.) for which the publisher holds copyright, permission has been obtained to post the material in NSUWorks. Any uses of material from this site beyond those considered to be fair use under the copyright law require express written permission from the copyright holder. Users may download, print and save materials for personal use, but re-publishing, re-posting, or redistribution of the materials without permission to do so is strictly prohibited.