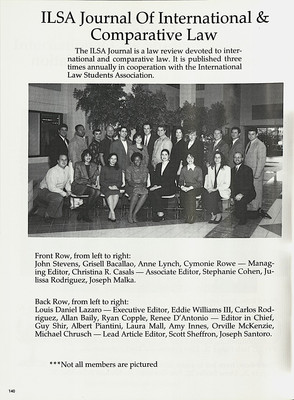 This is a posed photograph of the editorial board and staff of the ILSA Journal of Comparative and International Law who served during the 1996-1997 academic year. This photograph appeared in the First Amendment yearbook.

The first caption reads, "The ILSA Journal is a law review devoted to international and comparative law. It is published three times annually in cooperation with the International Law Students Association."

The fourth caption reads, "***Not all members are pictured."

This is an electronic .jpeg file that was created from the original photo that appeared in the 1997 edition of the Nova Southeastern University Shepard Broad College of Law School First Amendment yearbook.

This photograph includes staff and editorial board members who were involved in creating the ILSA Journal of International and Comparative Law during the 1996-1997 academic year.

This photo was scanned from the 1997 edition of the First Amendment yearbook created at the Nova Southeastern University Shepard Broad College of Law.