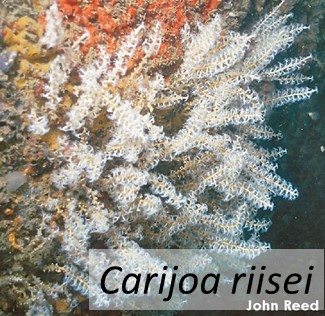 Colony Form: Dense bushy clusters of tangled, flexible, hollow stalks and branches with a prominent polyp at tip of each. Stalks with eight longitudinal grooves, sometimes >30 cm long. Branching is monopodial—main stalks arise as primary (axial) polyps from encrusting stolons and give rise to lateral daughter polyps by budding.

Sclerites: Polyp armature: row of small rods in base of each tentacle and in each mesentery below tentacle bases. Body wall: branching thorny rods 0.15-0.35 mm long that may partially fuse; slender curved spindles to 0.6 mm long, with few thorns, not fused.

Habitat: On natural and artificial hard substrates including pilings, wreckage, and under ledges and in caves protected from sunlight.

Notes: C. riisei is a fouling organism that is often itself encrusted or overgrown, usually by algae or sponge. It has been introduced into Hawaiian waters, perhaps via ship fouling, where it may form dense, monospecific carpets on hard substrates exposed to strong currents and may overgrow black corals (Antipatharia) at depths of 60-115 m (Grigg 2003, Khang & Grigg 2006). It may also occur elsewhere in the western Pacific and eastern Indian oceans. Bayer (1961) identified this species as Telesto riisei. According to DeVictor and Morton (2007) the tentacular rods are variable within and among polyps and may be difficult to see, particularly when polyps are retracted. Polyps appear to be smaller when larvae are present in calices.