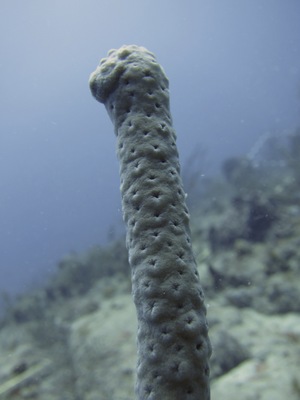 Bushy with tangled branches arising along much of colony, not just near base; to 1.8 m high; the only Eunicea species that does not exhibit a candelabrum pattern. Dichotomous branching in all directions.

Regularly placed; calyx either present or not. Calices may be flat, conical, or mound-like (not tubular) and project with ridges on inner aperture lip. Aperture borders may be only projecting or appear sealed or gaping. Lower rim does not form an obvious lip-like structure as other Euniceas.

Color varies from reddish ochre to beige to dark ochre.

Polyp armature a wide collar with numerous rod sclerites about 0.1–0.5 mm long. Axial layer: pale violet spindles to 0.25 mm long, with a few but notable ornamens. Middle layer: transparent spindles 0.6–2 mm long, sometimes curved and widened in middle. Surface layer: Small and enlarged clubs with multiple and radial rows in the handle ending in a sharp head, to 0.12 mm. Also, torch clubs with one row of ornaments in the handle.

On fore reef terraces and seaward reefs moderately exposed to wave and current in 10-30 m depths. Along the Outer Linear Reef ledge in Broward County, FL.