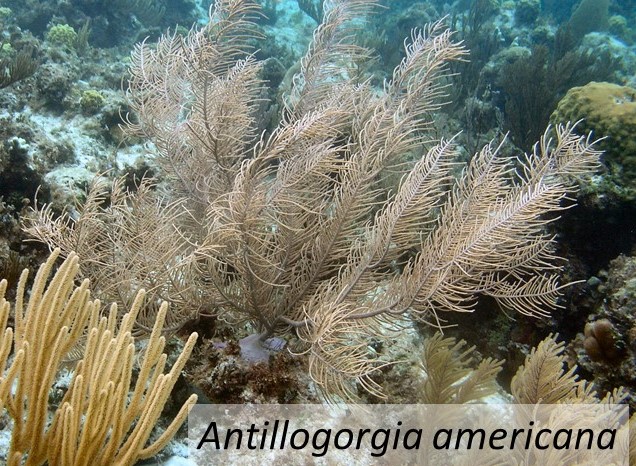 Branches: Pinnules long, flexible, regularly-spaced, flat or triangular in cross section, <5 mm across, usually in pairs on opposite sides of main branch.

Apertures: Flush but can appear bulbous; restricted to row along flattened sides of pinnules. Polyps contract slowly and often remain expanded when preserved.

Notes: Williams and Chen (2012) transferred all Western Atlantic species of Pseudopterogorgia to the genus Antillogorgia. Although Antillogorgia americana produces a number of secondary metabolites that appear to have anti-predator functions (Epifanio et al. 2007), it still may be preyed upon by the flamingo tongue gastropod, Cyphoma gibbosum, which preferentially consumes axial tissues near the base of colonies (Harvell & Fenical 1989). Bayer (1961) noted that bleaching for sclerite examination breaks the tissue down very slowly and releases far more zooxanthellae than in either A. acerosa or A. rigida.