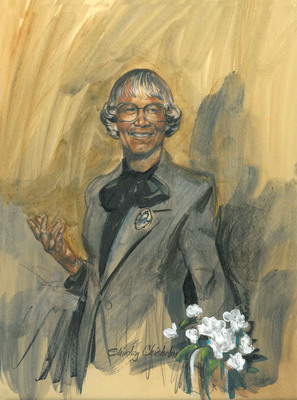 Shirley A. Chisholm (November 30, 1924 – January 1, 2005) was an American politician, educator, and author. She was a Congresswoman, representing New York's 12th Congressional District for seven terms from 1969 to 1983. In 1968, she became the first African-American woman elected to Congress. On January 25, 1972, she became the first major-party black candidate for President of the United States and the first woman to run for the Democratic presidential nomination (US Senator Margaret Chase Smith had previously run for the 1964 Republican presidential nomination). She received 152 first-ballot votes at the 1972 Democratic National Convention. Awards- In 1993, she was inducted into the National Women's Hall of Fame, and in 2002, scholar Molefi Kete Asante listed Shirley Chisholm on his list of 100 Greatest African Americans. On January 31, 2014, the Shirley Chisholm Forever Stamp was issued. It is the 37th stamp in the Black Heritage series of U.S. stamps.