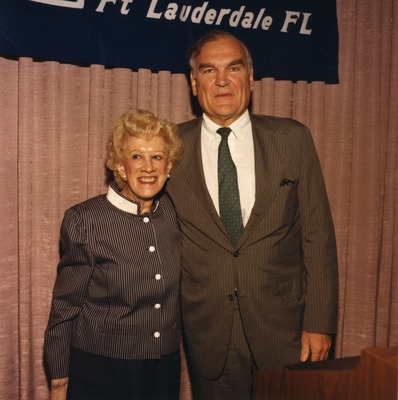 Mary McCahill (1907-1996) Mary McCahill was inducted in the Broward County Women's Hall of Fame in 1993, recognizing her contributions to Nova, the art museum, the American Red Cross, the Visiting Nurses Association, the American Hearing Society, the Opera Society, and the Philharmonic Orchestra.

Mrs. McCahill’s s intuitiveness and determination for helping the Nova, the Davie-based campus grow from 500 students in 1972 to more than 6,000 in 1989.

George Horace Gallup Jr. (April 9, 1930 – November 21, 2011) was an American pollster, writer, and executive at The Gallup Organization, which had been founded by his father, George Gallup.[1] Gallup expanded the scope of the Gallup Poll to encompass a wider variety of topics, ranging from the outlook of American young people to religious beliefs.

Much of Gallup's writings and research focused on religion and spirituality in the United States.[1] His works included The Saints Among Us, published in 1992, and The Next American Spirituality, published in 2002.

Born in Evanston, Illinois, Gallup graduated from the Lawrenceville School in 1948 and received a bachelor's degree in religion from Princeton University in 1953. In 1954, Gallup joined his father's polling company, The Gallup Organization, where he worked until his retirement in 2004. He and his brother, Alec Gallup, became co-chairmen of the company upon their father's death.