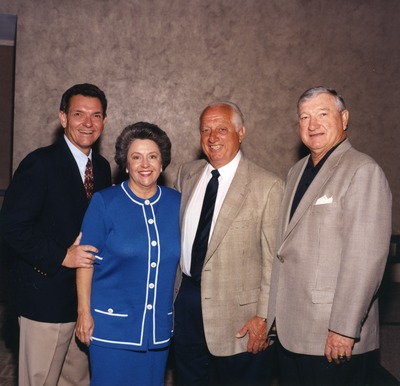 Tony SegretoTony has been a fixture in South Florida television for 40 years. He has been one of the most respected and trusted sportscasters and news anchors in the area. Tony anchored the news at WTVJ – NBC6 for almost 20 years.

Tony has won numerous awards over the years, including the Silver Circle Award and the Governors Award from the National Academy of Television Arts and Sciences.

Tony is a South Florida native and proudly supports his community. He serves on the boards of the Dan Marino Foundation, Boys and Girls Clubs of Broward and is the proud spokesperson for the Make-A-Wish Foundation and St. Jude’s Children's Hospital. Since his retirement from NBC6, Tony has joined the Board of Directors of BankAtlantic and Sports Advisory Board of Great HealthWorks.

Thomas Charles Lasorda (September 22, 1927 – January 7, 2021) was an American professional baseball pitcher and manager. He managed the Los Angeles Dodgers of Major League Baseball (MLB) from 1976 through 1996. He was inducted into the National Baseball Hall of Fame as a manager in 1997.