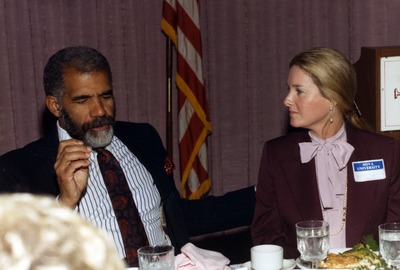 Linda Gill was born at Broward General Hospital, Linda spent time romping on the beach and swimming at the old saltwater Casino Pool located on the beach in what is now Alexander Park, east of the Hall of Fame. Her father, Bob Gill, was the owner of Gill Construction which built over 3, 000 homes in Fort Lauderdale in the mid-1940s. In 1948 his attention shifted to the hotel industry where he focused on building several of the beach area’s historical and landmark hotels. Among them were the 100 room, The Escape (now the Tiffany House on Rio Mar) which was the first hotel with a swimming pool. The Jolly Roger Hotel (now the Ramada Inn Sea Club) was the first hotel on the beach to have air conditioning. The Gill hotels were the first to be open year-round. The success of the hotels was bolstered in 1956 when NBC broadcast its noon and evening news from a studio on the seventh floor of the Yankee Clipper.

All the while, Linda never envisioned herself working alongside her father. She chose psychology as her major at the University of Florida, but her summer back in Fort Lauderdale would find her perched at the desk of one of Gill’s two signature hotels: the Sheraton Yankee Clipper or the Sheraton Yankee Trader on Fort Lauderdale’s beachfront. When she entered Florida International University for post-graduate work, it was hospitality, not psychology, that had become her passion. She worked in entry-level positions at the hotels and then worked for four years with an independent CPA, C. Vernon Kane while attending Florida Atlantic University for postgraduate work in accounting and finance. She returned to Gill Hotels and assumed her current position as Vice President operating 960 rooms in the two hotels.

Linda has been employed in the Hospitality and Tourism industry since 1975, but her friendly demeanor and goodwill have been an icon for Fort Lauderdale tourism much longer than that. She has served on almost every tourism, lodging, and hospitality affiliation in the area and has received numerous community awards. In 1991, she was the City of Fort Lauderdale Citizen of the Year.

She has been a huge Nova supporter and has been involved in numerous groups like The Gold Circle and sat on Nova's Board of Trustees.