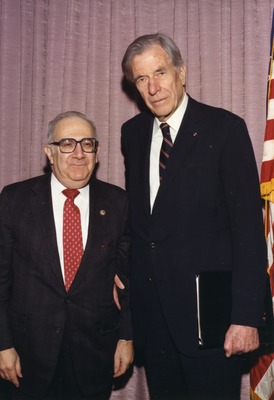 John Kenneth Galbraith[a] OC (October 15, 1908 – April 29, 2006), also known as Ken Galbraith, was a Canadian-American economist, diplomat, public official, and intellectual. His books on economic topics were bestsellers from the 1950s through the 2000s. As an economist, he leaned toward post-Keynesian economics from an institutionalist perspective.

Galbraith was a long-time Harvard faculty member and stayed with Harvard University for half a century as a professor of economics.[4] He was a prolific author and wrote four dozen books, including several novels, and published more than a thousand articles and essays on various subjects. Among his works was a trilogy on economics, American Capitalism (1952), The Affluent Society (1958), and The New Industrial State (1967). Some of his work has been criticized by economists Milton Friedman, Paul Krugman, Robert Solow, and Thomas Sowell.

Galbraith was active in Democratic Party politics, serving in the administrations of Franklin D. Roosevelt, Harry S. Truman, John F. Kennedy, and Lyndon B. Johnson. He served as United States Ambassador to India under the Kennedy administration. His political activism, literary output, and outspokenness brought him wide fame during his lifetime. Galbraith was one of the few to receive both the World War II Medal of Freedom (1946) and the Presidential Medal of Freedom (2000) for his public service and contributions to science. The government of France made him a Commandeur de la Légion d'honneur.