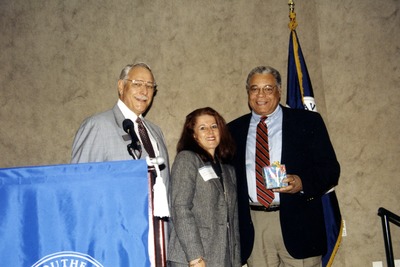 He is also a member of the Broward County Bar Association and Broward County Trial Lawyers Association. In 1995, he was appointed by Governor of the State of Florida to serve as Chairman of the Committee of Inquiry - 15th Judicial Circuit Nominating Commission, to investigate alleged improprieties in the judicial nominating process, and is currently serving as a member of the Board of Governors of the Tower Club, National Conference for Community and Justice, Broward Workshop and Broward Alliance, and on the Board of Directors of the United Way.

NSU Office of the President

James Earl Jones (born January 17, 1931) is an American actor whose career spans more than seven decades. He has been described as "one of America's most distinguished and versatile" actors for his performances in film, theater, and television, and "one of the greatest actors in American history". Jones has been said to possess "one of the best-known voices in show business, a stirring basso profondo that has lent gravel and gravitas" to his projects, including live-action acting, voice acting, and commercial voice-overs. Jones has a stutter which was more pronounced in his youth. In his episode of Biography, he said it was helped by poetry, public speaking and acting. A pre-med major in college, he served in the United States Army during the Korean War before pursuing a career in acting. Since his Broadway debut in 1957, he has performed in several Shakespeare plays including Othello, Hamlet, Coriolanus, and King Lear.

Jones made his screen debut in Stanley Kubrick's 1964 film Dr. Strangelove. After working steadily in the theater, Jones won his first Tony Award in 1968 for his role in The Great White Hope, which he reprised in the 1970 film adaptation earning him Academy Award and Golden Globe nominations. Jones starred with Diahann Carroll in the acclaimed 1974 romantic comedy-drama film Claudine, for which he received a Golden Globe nomination. He won his second Tony Award in 1987 for his role in August Wilson's Fences. He became well known as the voice of Darth Vader in the original Star Wars film trilogy, released between 1977 and 1983. Throughout the 1980s and 1990s, Jones appeared in a number of successful films, including Conan the Barbarian (1982), Matewan (1987), Coming to America (1988), Field of Dreams (1989), The Hunt for Red October (1990), The Sandlot (1993) and The Lion King (1994). During the 21st century, Jones has steadily continued working in the theater. He starred alongside Angela Lansbury in Gore Vidal's The Best Man (2012), and in an Australian tour of Driving Miss Daisy (2013). He also appeared in You Can't Take it With You (2014) with Annaleigh Ashford and in The Gin Game (2015–16) alongside Cicely Tyson. He reprised several of his popular film roles in the Star Wars prequel Rogue One (2016), the remake of The Lion King (2019), and the sequel Coming 2 America (2021).

Over his career, Jones has won three Tony Awards (out of five nominations), two Primetime Emmy Awards, and a Grammy Award. He was inducted into the American Theater Hall of Fame in 1985. Jones was presented with the National Medal of the Arts by President George H.W. Bush in 1992. He received the Kennedy Center Honor in 2002. Jones was invited by President Barack Obama to perform Shakespeare at the White House Evening for Poetry in 2009. That same year he also received the Screen Actors Guild Life Achievement Award. He received an Honorary Academy Award on November 12, 2011. Jones received an Honorary Doctor of Arts degree from Harvard University on May 25, 2017. He was honored with a Special Tony Award for Lifetime Achievement in the Theatre in 2017.