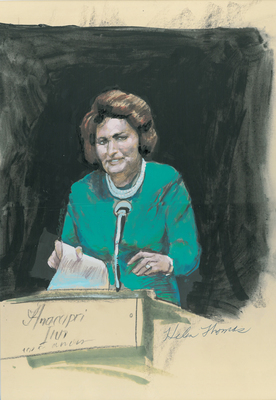 Thomas worked for the United Press and post-1958 successor United Press International (UPI) for 57 years, first as a correspondent, and later as White House bureau manager. She then served as a columnist for Hearst Newspapers from 2000 to 2010, writing on national affairs and the White House. Thomas was the first female officer of the National Press Club, the first female member and president of the White House Correspondents' Association, and the first female member of the Gridiron Club. She wrote six books; her last (with co-author Craig Crawford) was Listen Up, Mr. President: Everything You Always Wanted Your President to Know and Do (2009).

Thomas retired from Hearst Newspapers on June 7, 2010, following controversial remarks she made about Israel, the Israeli–Palestinian conflict, and potentially Israeli Jews in an impromptu, unstructured amateur short interview when solicited for "any comments on Israel," she replied that "tell them to get the hell out of Palestine," leading to multiple accusations of antisemitism. She then served as an opinion columnist for the Falls Church News-Press until February 2012