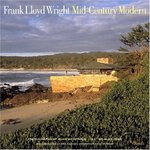 "The mid-twentieth century was one of the most productive and inventive periods in Wright's career, producing such masterworks as the Guggenheim Museum, Price Tower, Fallingwater, the Usonian houses, and the Loveness House, as well as a vast array of innovative furniture and object design. With a variety of shapes and forms-ranging from honeycombs to spirals-this period is an important contribution to mid-century modernism. Mentoring such talents as Richard Neutra and Rudolph Schindler among others, Wright was one of the most influential proponents of the simplicity, democratic designs, and organic forms that characterize Mid-Century Modern. With lavish, new, previously unpublished color photographs and detailed plans, Frank Lloyd Wright: Mid-Century Modern is a comprehensive examination of an underserved period in Wright's career."

Find in your library