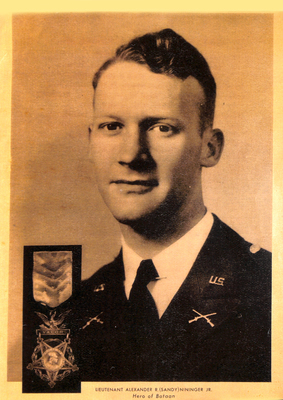 Nininger, nicknamed "Sandy", was born in Gainesville, Georgia in 1918. He attended the United States Military Academy and graduated in May 1941. After being commissioned a Lieutenant he was sent to the Philippines and was attached to the 57th Infantry Regiment (United States) of the Philippine Scouts. After entering active service, according to Malcolm Gladwell, Nininger "wrote a friend to say that he had no feelings of hate, and did not think he could ever kill anyone out of hatred. He had none of the swagger of the natural warrior. He worked hard and had a strong sense of duty." Nininger loved to draw pictures.

During the first month of the Japanese invasion of the Philippines, Nininger's unit helped prepare American defenses in Bataan. After the Japanese launched their assault on Bataan, Nininger voluntarily joined another company because his unit was not yet engaged in combat.

Nininger was killed in action near Abucay, Bataan on January 12, 1942. He was posthumously awarded the Medal of Honor for leading an assault on Japanese positions. He was the first American army soldier to be so honored in the Second World War.