After Medal Ceremony of the USS Asheville PF-1 Crew 1944 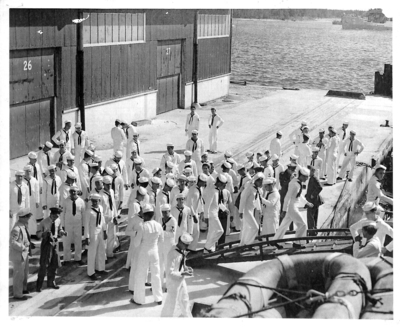 USS Asheville (PF-1) was an Asheville-class patrol frigate of the United States Navy that served during World War II.

She was launched on 22 August 1942 but due to a lack of American vessels for convoy protection she was transferred to the United States Navy prior to completion. On 1 December 1942, she was commissioned in Montreal as USS Asheville (PG-101), a patrol gunboat. She was reclassified PF-1 on 15 April 1943.

Initially, Asheville served on convoy escort but then transferred to anti-submarine patrols.

She was decommissioned in January 1946 at the Norfolk Navy Yard and struck from the Navy Register in February.