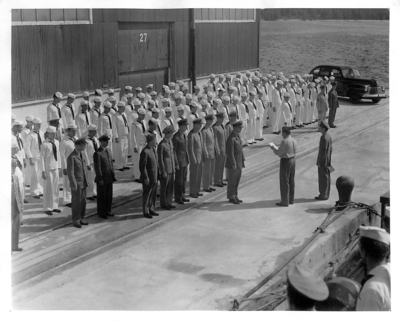 USS Asheville (PF-1) was an Asheville-class patrol frigate of the United States Navy that served during World War II. She was laid down on 10 March 1942 by Canadian Vickers Ltd. in Montreal, Quebec, Canada as the River-class frigate HMS Adur (K296) to serve in the British Royal Navy. She was launched on 22 August 1942 but due to a lack of American vessels for convoy protection, she was transferred to the United States Navy prior to completion. On 1 December 1942, she was commissioned in Montreal as USS Asheville (PG-101), a patrol gunboat. She was reclassified PF-1 on 15 April 1943.

In May 1944, Asheville reported to the Boston Navy Yard where experimental anti-submarine warfare (ASW) gear was installed. Once the equipment was installed she began testing it under the guidance of the Commander, Antisubmarine Development Detachment, U.S. Atlantic Fleet (COMASDEVLANT). In early September, her experimental testing was interrupted when she joined a hunter-killer group in a search for a suspected German U-boat. The search turned up nothing and she reported back to her experimental testing. On 15 September, she relocated to Port Everglades, Florida, COMASDEVLANT's new surface ship base. She operated out of that port until April 1945, testing several ASW devices.[3]

On 13 April 1945, Asheville reported to New York with a new assignment with the Commander, Eastern Sea Frontier, where she returned to antisubmarine patrols. Less than a month later, on 8 May, hostilities ended in Europe and the Atlantic Ocean. With the threat of U-boats gone, Asheville returned to Port Everglades where she underwent more experimental testing. On 19 July 1945, she received orders to return to New York where an experimental radar system was installed. She spent the remainder of 1945 testing the RADAR system along the eastern coast. Wikipedia