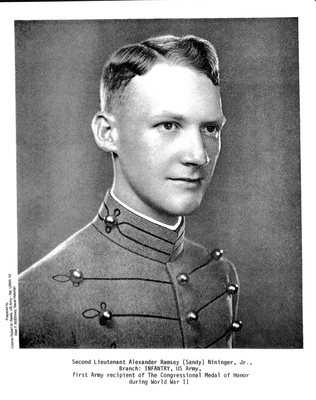 Citation: " For conspicuous gallantry and intrepidity above and beyond the call of duty in action with the enemy near Abucay, Bataan, Philippine Islands, on 12 January 1942. This officer, though assigned to another company not then engaged in combat, voluntarily attached himself to Company K, same regiment, while that unit was being attacked by enemy force superior in firepower. Enemy snipers in trees and foxholes had stopped a counterattack to regain part of position. In hand-to-hand fighting which followed, 2d Lt. Nininger repeatedly forced his way to and into the hostile position. Though exposed to heavy enemy fire, he continued to attack with rifle and hand grenades and succeeded in destroying several enemy groups in foxholes and enemy snipers. Although wounded 3 times, he continued his attacks until he was killed after pushing alone far within the enemy position. When his body was found after the recapture of the position, 1 enemy officer and 2 enemy soldiers lay dead around him." NASFLMuseum