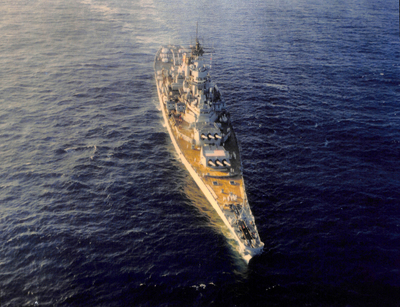 Aerial of USS Iowa (BB-61) (Lead ship of her class, USS Iowa (BB-61), was commissioned at New York Navy Yard, Brooklyn, New York, on February 22, 1943. Following the transport of President Franklin D. Roosevelt to and from the Casablanca Conference at French Morocco, in January 1943, she spent the rest of World War II in the Pacific, participating in the Marshall and Mariana Islands Campaigns; Okinawa Campaign; and the Japanese Surrender at Tokyo Bay on September 2, 1945. Iowa was decommissioned in March 1949 and was recommissioned two years later for the Korean War, serving as the Seventh Fleet flagship during April-October 1952. Following this duty, she transited to the Atlantic Fleet and made several European cruises until being decommissioned in February 1958. Modernized for the 1980s defense build-up, Iowa was recommissioned in April 1984 and made several cruises to European waters. On April 19, 1989, a fire in her second sixteen-inch gun turret killed 47 crewmen. Iowa was decommissioned in October 1990 and currently serves as a museum battleship at the Port of Los Angeles, California.) Information from the Naval History and Heritage Command National Museum of the U.S. Navy