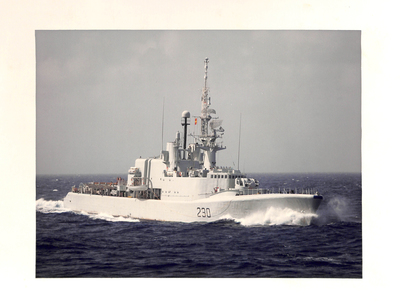 HMCS Margaree was a St. Laurent-class destroyer that served in the Royal Canadian Navy and later the Canadian Forces from 1957–1992. She underwent conversion to a destroyer helicopter escort (DDH) in the mid-1960s and was officially reclassed with pennant DDH 230 on 15 October 1965. The vessel served until 1992 when it was discarded, sold for scrap, and broken up in 1994. (Wikipedia)