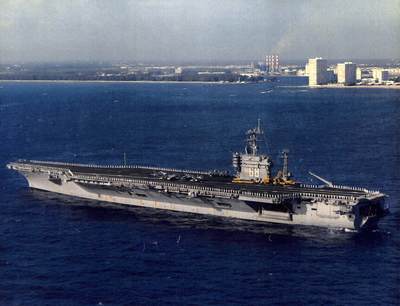 USS Nimitz (CVN-68) is a supercarrier of the United States Navy and the lead ship of her class. One of the largest warships in the world, she was laid down, launched, and commissioned as CVAN-68, "aircraft carrier, attack, nuclear powered", but she was later redesignated as CVN-68, "aircraft carrier, multi-mission, nuclear-powered", on 30 June 1975, as part of a fleet-wide realignment that year.

The ship was named after World War II Pacific fleet commander Chester W. Nimitz, USN, (1885–1966), who was the Navy's third fleet admiral. Nimitz had her homeport at Naval Station Norfolk until 1987 when she was relocated to Naval Station Bremerton in Washington (now part of Naval Base Kitsap). Following her Refueling and Complex Overhaul in 2001, her home port was changed to Naval Air Station North Island in San Diego County, California. The homeport of Nimitz was again moved to Naval Station Everett in Washington in 2012.